Born in Hertfordshire in 1968, Grant was educated at Watford Grammar and Cassio College Watford, before studying Business & Finance at Manchester in the late 1980s. In 1990, Grant founded his own printing company at the age of just 21.

Before getting into politics, Grant started a small printing shop, which grew into a commercial design, print & web development company with clients throughout the UK and the rest of the world. Grant successfully established a team of fellow Directors who now run the business today without his input.

Grant says that his experience of creating and running his own business has been very helpful in providing the necessary skills to be a Government Minister, particularly when it comes to working with the Civil Service. He has also found the skills he picked up in business have been invaluable in representing the concerns of his constituents .

Grant married Belinda in 1997. The couple live in Welwyn Hatfield and play an active role in the community. They have a boy named Hadley born 2001 and twins born April 2004 called Tabytha and Noa. Grant holds a pilot’s licence and enjoys general aviation as a pastime.

In 1999 he was selected as the candidate for the then Labour seat of Welwyn Hatfield for the 2001 General Election. He produced one of the best Conservative swings of the election, slashing the then Labour majority from 5,595 to just 1,196.

Grant was reselected for Welwyn Hatfield in 2002 and went on to win the May 2005 General Election with a majority of 5,946 taking his seat from Labour Minister Melanie Johnson. The 8.2% swing was one of the biggest nationwide.

In May 2010 he was re-elected for Welwyn Hatfield with a surprising 17,423 majority. The 11.1% swing was once again one of the largest national swings to the Conservatives in the country and easily Welwyn Hatfield’s biggest ever majority for an MP of any Party.

On Brexit, Grant voted Remain but is now committed to the results of the referendum and has been a supporter of Brexit since.

In the Snap General Election of June 2017, Grant was re-elected with an increase to 51% of the vote share.

For more information on Grant click on the link below: 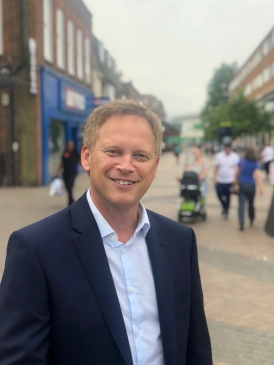