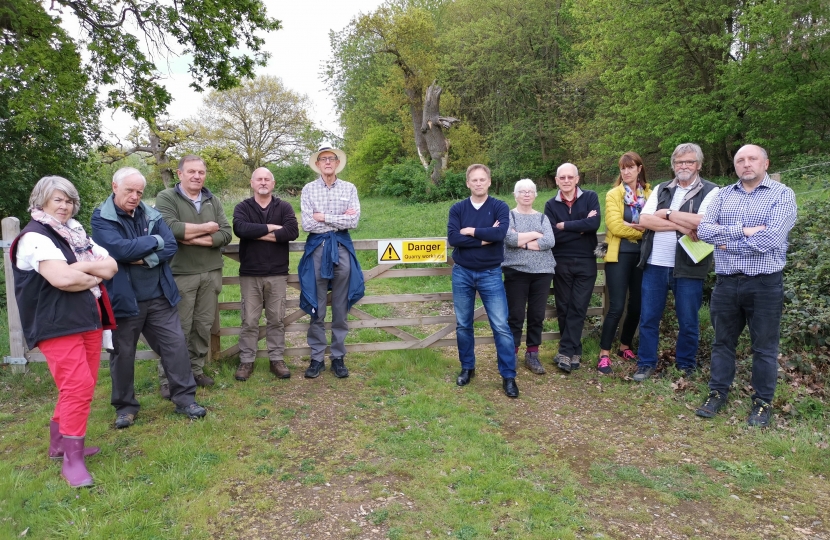 Welwyn Hatfield's MP Grant Shapps recently met with the Welwyn Garden City Society (WGCS) and Friends of Panshanger Park (FPP) to again visit the site of the locked gate at the Mimram Valley walking route, which has remained closed to the public long after it was supposed to open.

Mr Shapps met with developers Tarmac in 2014 and 2016. They pledged on each occasion to open the walkway, which links Panshanger Park and Hertford from east to west. However, five years on from the original pledge, the route remains barred by a locked gate. This puts the residents of Welwyn Garden City in a position of not being able to use a wonderful local amenity, and blocking off a convenient walking route between two local towns.

Speaking of his visit, Mr Shapps said: "The fact that Tarmac have failed to open the path after twice telling me they would is unacceptable. They have never given a reason for continued closure, and I will be meeting with them soon to demand better."

Will Davis, a spokesman for The WGCS, said: "On Friday MP Grant Shapps was invited back to the park to see once again the route being kept under lock and key by Tarmac. Grant has now visited the park three times and has asked landowners Tarmac why this key route remains closed.

“We have been asking for this picturesque route to be opened for 5 years now. We are repeatedly told by Tarmac that it will be, but it doesn't happen. There is no justifiable reason why the path can't be opened now; all it takes is for two gates to be unlocked."

Mr Shapps will continue to work with the WGCS, FPP, and other local groups to press Tarmac to open this route to the public. For more information on the groups and their efforts to open the path, please visit www.friendsofpanshangerpark.co.uk, and www.wgcsoc.org.uk